Valencia is a sun-kissed destination on the eastern Mediterranean coast of Spain and a very popular destination for learning Spanish. Besides the beach and the sea, Valencia and its environs offer countless sights, exciting attractions, large sports events, culinary delights, and much more. One of the best arguments for choosing Valencia for studying Spanish is, of course, its outstanding climate: 300 days of sunshine every year with the Mediterranean beckoning you to dive right in between April and mid-October.

In the old part of town, you can see and feel Valencia's Arabic past as you wander blissfully through the narrow streets on your way to the 750-year-old cathedral or the glorious buildings from the Gothic and Art Nouveau eras. One of the largest and most recent of Valencia's attractions is the Ciudad de las Artes y las Ciencias (City of Arts and Sciences), a modern city standing on the dry riverbed of the river Turia. You'll be fascinated by the sights and views of Valencia!

If you like sport, you can enjoy the America's Cup and the annual Formula 1 race in Valencia. The culinary delights of Valencia include the traditional paella dish, which tastes better in Valencia than anywhere else in the world. They also know how to party in Valencia and don’t take life too seriously. Each March sees the spring celebration of the Fallas where larger-than-life colourful papier-mâché figures are erected and then set ablaze on the last day of the celebration. The last weekend in August sees Valencia's streets transformed into a river of tomato sauce during the Tomatina, a world-famous tomato fight dating back to the 1940s. 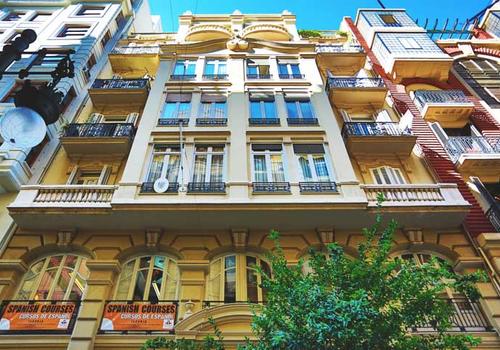 The best experience of my life.
In 8 weeks of courses, I've learned a lot about Spanish, and I've met a lot of people too.
Always in my heart Valencia.

The school environment is very good, and the teachers are very friendly, patient, and often organize activities, and I personally prefer teaching in small classes, this way progress will be fast! The best thing is being able to meet classmates from all over the world!

The best recommendation will be my result: after a year of study, I passed the DELE B2 exam! I would like to thank the school administration for organizing the learning process and for the individual approach.

Hispania has very unique teaching system and flexible timetable. You can design your own individual schedule for your level. It’s not like four hours a day, five days a week, eight weeks course like most language schools. I highly recommend Hispania for everyone who wants to improve their Spanish at any level.

I've taken classes in person and now online and love the content and the teachers! They are very patient and always make the class interesting and fun.

No doubt it's the best academy to study Spanish. Great level of studies and a great program of activities and events to know Spain. I recommend it.

So happy I chose this school, everything about it has been amazing! All the teachers are native, kind and dedicated to their work; and its location + prices are amazing!! My Spanish has improved so much and I want to thank everyone there for this. Would definitely recommend Academia Contacto to everyone I know!!

Excellent school to learn Spanish and I enjoyed a lot. Thank you so much!

The seriousness and simplicity of classes are excellent